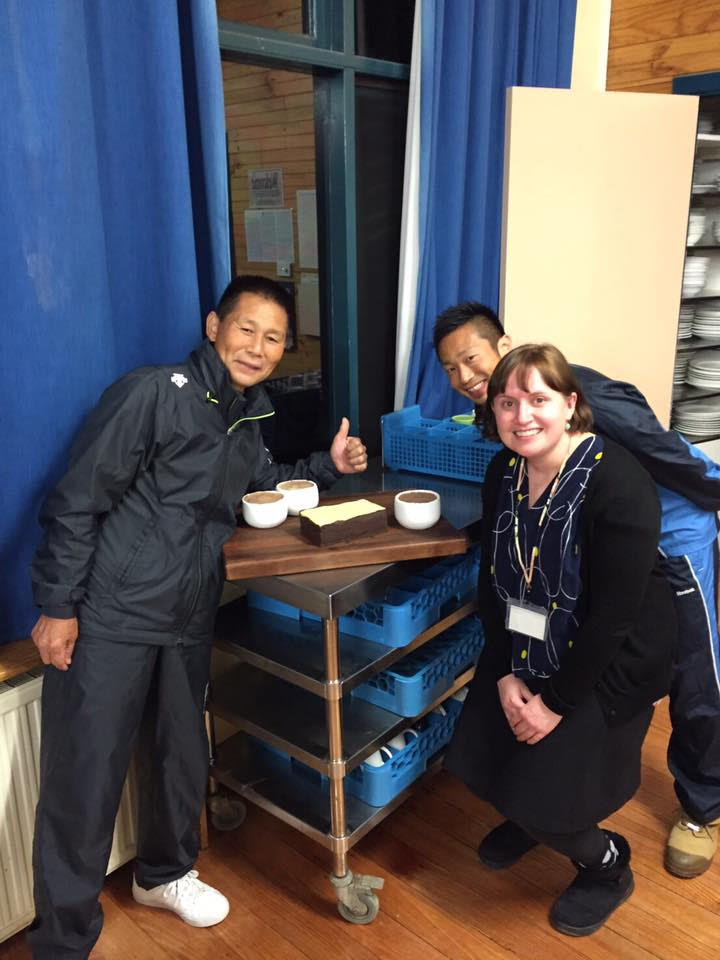 I‘m a Japanese-to-English translator and interpreter who specialises in taiko-related content. I’m one of the only interpreters I know who brings earplugs to work. I live in my hometown, Auckland, New Zealand, and I joined Taikokoro when it launched as a Rinjin member.

I started playing taiko in 2001 when I was teaching English on the JET Programme in Ehime, Japan. There was a newly-formed group in the village where I lived, and when I was invited to give it a go, I said yes because I needed a hobby and I wanted to make some local friends. Joining that group changed my life. Instead of staying in Japan for 2 or 3 years as I originally planned, I decided to stay longer and keep working on my Japanese and to keep playing taiko. After volunteering at Earth Celebration, the annual music festival hosted by Kodo —one of Japan’s leading taiko groups— I was offered a job as staff with the ensemble. They needed an in-house translator and an international tour manager, which was a big change from my teaching experience. I decided to take the plunge and moved to Sado Island to work for Kodo in 2007. I was based there for 6.5 years, and 14 years on, I still handle their translation and English PR. While I lived on Sado, I played taiko sporadically due to my very irregular schedule. I got to play when I was staffing Kodo Juku workshops, and in a Hachijo Daiko circle that ran once or twice a month. During my years of touring, I traveled around the world with Kodo and our truck full of taiko to give performances throughout Europe, South America, Australia, and Japan. I

have a lot of taiko travel stories, so feel free to ask me about those over a drink in person some time.

So how did I find out about Taikokoro? Through Ayako Tsunazawa, who I was introduced to through Kodo during our 2009 Australia Tour with Taikoz. Later, another plot twist, I ended up living in Melbourne. From 2013 to 2016, I played taiko very occasionally with Australia Miyake Kai, Shome Shome Club, and Dokkoisa Wachi Kai around my busy Master of Interpreting and Translation Studies coursework at Monash University. During my time in Melbourne, I clocked up a lot of hours interpreting at taiko workshops and Miyake Taiko Intensive Workshops. I spent more time talking about taiko than playing it. But in recent years, before COVID anyway, I’ve been playing Miyake Taiko in Tokyo during business trips there. It’s been great to start playing again. I’ve been back to Australia to catch up with friends, interpret at taiko workshops, and attend taiko concerts. I hope to be back over there again soon to see everyone.

I love how taiko brings people together. The sound connects people and spreads joy for one, and when people play taiko, it opens their hearts, resets their minds, and gives them an energy boost. I think it’s a great form of physical and mental therapy for people who play it and people who hear it alike.

One of my best taiko memories is when I was on tour with Kodo in Montreal, where we were performing the taiko music for Kaguyahime—The Moon Princess, a work that combines ballet with Western percussion, taiko, and Japanese court music. I was sitting at the back of the theater, near the lighting operator, when the house lights dimmed for the second act to begin. The odaiko (big drum) appeared on stage, lit up to look like a full moon and the audience drew breath. A Kodo performer, Eiichi Saito, appeared, steadied himself, and beat the drum with a mighty stroke. Boooommmmm. A low, quiet howl echoed out from deep within the guide dog lying on the floor, at his visually-impaired owner’s feet, three seats down from me. The golden lab couldn’t see the stage, but that sound had unleashed a primal reaction that he couldn’t hold back. His owner gave him a reassuring pat and I clamped both hands over my mouth to hold back the giggles. When I hear the first strike of the big drum, I often remember that moment.