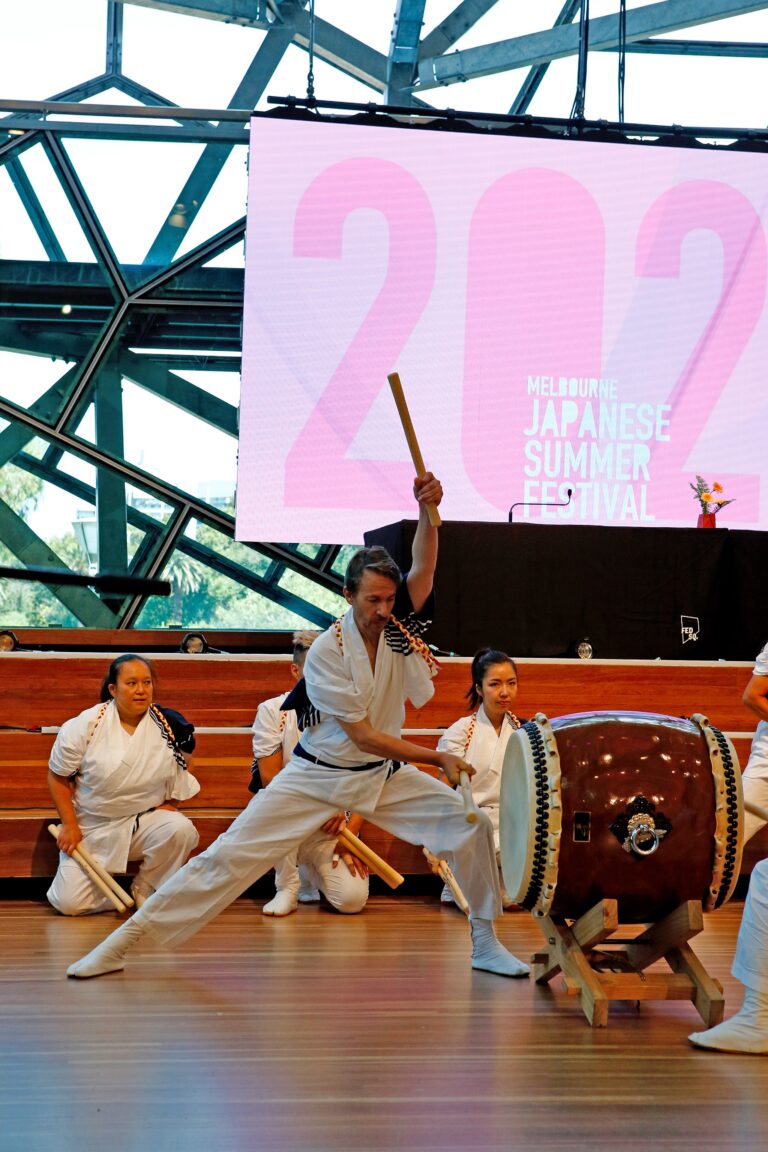 My name is Jonathon. In the grown-up world I’m what’s called a Pre-media specialist, and spend most of my time these days doing Photoshop Image retouching in a large photography studio. Outside of that, my spare time these days pretty much seems to be consumed by family, food, music, and Taiko (as much as I can get!).

I’m relatively new on the Taiko scene, starting towards the end of 2019 (with a big pandemic gap in there, so no Taiko for a year, ouch!), but Taiko has for a long time been an itch that needed to be scratched, so I took the plunge and have never looked back. I do kick myself sometimes for not doing it when I first discovered Taiko and it’s energy, but get over that feeling quickly because I’m doing it now, and it’s not healthy to dwell on the past. I had been been watching Taiko from afar for a long time, admiring, and being inspired by anyone I had seen live, or on youtube (I’ve watched a lot!), and probably like a lot of people, being able to do something like this seemed a little out of reach, but one day just thought “bugger it, I want to do that, and I want to be that person to inspire others!”, hopefully motivating others to at least give it a try, as there’s no reason why you can’t. Being in the crowd watching people perform just wasn’t enough. I wanted to be the performer. Taiko’s grip was just too strong!

Things change once you take that first step, and you realise there’s no reason to not do it, and from there your Taiko journey begins. I feel it is a large part of my life now, and know that I will never stop learning, and I really look forward to that aspect.

Soon after joining Wadaiko Rindo in Melbourne, I joined Australia Miyake Kai for Miyake style, as it’s power, energy, grace and style just made sense to me (and I couldn’t stop thinking about it!), which in turn led to me joining Taikokoro, and I eagerly look forward to delving into other styles as soon as time permits.

What I love about Taiko is that you can get what you want out of it. It can be as fun as you want it to be, or as much a challenge as you want it to be. Everybody is different and will get different things out of it, but you know that you will all meet in the middle somewhere, and that’s what it’s all about. This I like. Taiko is a challenge for me, and gives me confidence and balance, and it’s confirmation of what I always knew deep down, that Taiko is for me. It has also given me the confidence to do things I thought I’d never do, and things that scared the hell out of me. Performing in front of a crowd being one of those. Now that is all I want to do, and if I can inspire someone else to do it at the same time, even better!

There’s also the energy, the fun, the beats, the rhythm, the people, the passion, the history, the frustration, the lack of sleep (waking up constantly with beats whizzing around your head!), the fitness, the strength, the aches, the pains, the sore muscles, and more… all worth it of course…

…AND, you get to hit big drum with big sticks!

So far my most memorable moment would be performing at the Melbourne Japanese Summer Festival only months after having joined Australia Miyake Kai, for my first ever performance, and I take great pride in the fact that I was asked to be part of it, and very thankful to Sensei for asking me. The fact that I was asked to perform was memorable enough. Because of the current climate, it was a streamed online from Deakin Edge, Fed Square (a spectacular venue to be in in itself), and although being in front of a full tv production crew was a little overwhelming, I found myself keeping quite calm and I thoroughly enjoyed the experience. It’s something I will never ever forget. The really scary part for me was being stuck in traffic on my way in on the day, thinking I was going to miss it!

1. Would you rather have unlimited sushi or unlimited tacos for life and why?

2. What is your most embarrassing/favourite song?

I wouldn’t say embarrassing, but because I do like my music to be a little on the raw side (i do like my metal), Owaranai Sekai De by DAOKO is my pick. This song goes against my usual listening habits, but I come back to it often and very rarely do I give it just one listen. It feels a little from anther time, but it’s instrumental progressions and melodies are a bit of a songwriting masterclass, and it gets me every time!

3. What is the dumbest way you’ve been injured (taiko or non-taiko related)?

Maybe not so the dumbest, but probably more unlucky is my shoulder injury. I always had “loose” shoulders and had popped my right shoulder out quite a few times but always managed to get it back in. One day when lifting a box above my head I sneezed and my shoulder dislocated, but for good this time, and I had to be rushed to the doctor. That was pain. A shoulder reconstruction and four months of rehab followed. I never really gained confidence in that shoulder, and it hindered me somewhat in doing a lot of things. Yoga sorted me out, and then Taiko, which has allowed me to have full confidence in it. I feel I can strike a taiko with the best of them now! A liberating experience, which I thought would never happen! Yay!